Since quite a few people have asked for details about Levi's birth, here are the essentials:
At around 10:30pm on Oct. 20th I noticed that the cramps I'd been having off and on for several days had become much more frequent and regular. I wasn't convinced that I was 'in labor' but thought that these cramps might be an early indication that  real 'labor' might start soon. I went to bed only to discover that laying down was most definitely a bad plan; that made the contractions (which I still thought might just be "cramps")almost unbearable. Even though I wasn't sure if these were even real contractions, I figured I'd better time a few just to see if there was a pattern; sure enough, they were coming about 2-3 minutes apart! They weren't lasting very long and were more uncomfortable than they were painful (as long as I wasn't laying down) so I thought we probably still had a ways to go before "active" labor. Still, a little after 11pm, I told Isaac I thought I was in labor and asked him to go to Walmart to get a yoga ball. I'm pretty sure he didn't believe that I was actually in labor, but went to get the ball and got it all set up for me (incidentally, I'm not usually this unprepared, but I really didn't think I'd go into labor for several more days and had a plan to buy the ball "soon"...the best laid plans and all that). I labored through the contractions for another couple of hours, watching TV and sitting on the yoga ball until they were consistently 1 minute long and 2 minutes apart. At that point, I asked Isaac to call the midwife so we could meet her at the birth center. He did and we set off to the birth center. Even as we were leaving, I wasn't convinced this was "it"; I told Isaac that I would be extremely unhappy if this was a false alarm and they sent us home again. He laughed; I'm pretty sure he still wasn't convinced I was really in labor (who can blame him? I  wasn't convinved I was really in labor) but off we went. We arrived at about 2:30am and got settled in with the student midwives; I found that as long as I sat on my little yoga ball and held Isaac's hands, I could relax and manage the contractions without too much trouble; they were uncomfortable, but not at all painful in the way I was expecting.  Laying down or sitting on anything else was extremely unpleasant, so I stayed as much as I could with my little ball. Jeanetta, the midwife, arrived shortly after 3am, checked and announced that I was about 6cm dilated. Horray! This was "real" labor and we were going to have a baby soon. I moved to the birth tub and labored in the water through another 45 minutes or so of increasingly intense contractions. At about 3:45 I felt a ton of pressure to push and told Jeanetta; she checked again and told me I was ready to go; if I felt the urge to push I should go ahead. I did (holding onto Isaac's hands the whole time; his poor fingers) and after about 30 minutes of pushing, little Levi was born!
Things really did go that fast! From the time I was aware that I was having regular contractions to the time Levi was born was only about 6 hours. The labor and delivery went exactly as I hoped they would; Isaac was the best support I could have ever asked for, the birth center staff was amazing and little Levi is perfect. We are very blessed.
And now, a picture, just because I can: 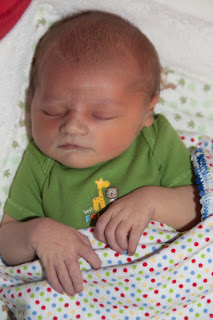 I am now awake 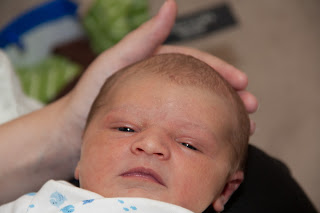 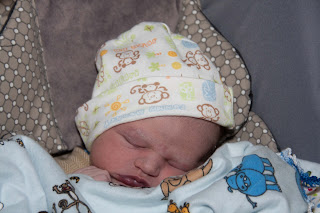